This potential useful species is the black soldier fly (BSF), Hermetia illucens. It iscONsidered a non‐pest species native TO North and South America ranging from 40 degrees north to 40 degrees south(McCallan 1974). 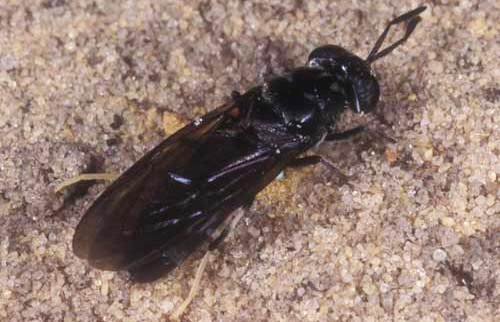 The species is not considered a disease vector or a nuisance to humans (Furman et. al. 1959); however there have beenreported cases of intestinal myiasis in humans (Lee et. al. 1995). Myiasis is the parasiticconsumption of tissue by fly (Diptera: two‐winged) larvae. These reports appear limitedto cases where infection occurred in equatorial zones. The likelihood of disease transferfrom BSF to humans in a waste management facility is not known, but with the use of adequate personal protective equipment, the incidence of such transfer is not expected to be significantly worse than current disease vectors present at a landfill.

The adult flies are not believed to congregate around human residences as a disease spreading organism (Furman et. al. 1959). This is mostly likely because studies suggest that the flies do not need to consume food during the adult phase of their life cycle(Sheppard et. al. 2002, Furman et. al. 1959) and this significantly reduces the opportunity to spread disease. Instead, the adults are pre‐occupied with mating,egg‐laying and when necessary, acquiring water.

Previous: What are the prospects of farming mealworm
Next: Pet gets healthy with Mealworm Protein